Krish: Welcome to Chaoyang Trap House, a newsletter about everyday life on the Chinese internet. It’s a regular (usually fortnightly) exploration of contemporary China, one important niche at a time. We’re interested in marginal subcultures, tiny obsessions, and unexpected connections.

Krish: Indeed. Our entire house style is “anti-hegemony”. Rather than authoritative explainers, we want to feel like the best group chat you’ve ever been in.

Yi-Ling: Cultures are expansive, communal and ever-evolving. This format reflects that belief.

Tianyu: It’s a newsletter, broadly, about the culture of being online in China and, specifically, about the hidden phenomenon, emergent trends and unusual cultural mashups that are bubbling up on the Chinese web. We’ll feature field notes, observations, illustrations, ethnographies, photo essays, and the sublime journalistic form of chat screenshots.

Krish: China’s contemporary culture, but with less 🤡 and more uWu.

This newsletter is a small attempt to find some joy in trying to parse this ridiculous, diverse country and to focus on agency, expression, and weirdness. We won’t shy away from the political (how could we?) but we center people rather than “markets,” ideas rather than “business models,” and look beyond the binary of “resistance/complicity to authority” that defines so much of culture writing about China today.

Jaime: Why do we still think of life on the Internet and in China as monolithic experiences to be grasped and owned? What if there is a way to relieve ourselves of the impulse to draw grand theories and to reduce differences to metaphors? How far could an exercise in paying attention travel?

Tianyu: Our aim is not to follow “trending topics” so much as the social issues and emergent behavior that fringe (and mundane) culture illuminates. We’re a spiritual sequel to the Magpie Kingdom newsletter. (By sequel, we mean more like Mad Max: Fury Road than Wolf Warrior II.)

Krish: Yes, we had frustrations with how contemporary culture in China was being depicted in English, but it was paired with a recognition that it has been done well before.

Magpie Kingdom was our collective favorite, a newsletter about online culture in China that existed 2017-18. Founded by Christina Xu, Tricia Wang, and Pheona Chen, it was a Venn diagram intersection of Good Things: knowledgeable, empathetic, irreverent.

Tianyu: We wanted to build on all of that. Magpie Kingdom’s smarts + an expanded roster of contributors and a wider mix of stories from both the present and past of the Chinese internet. It’s really important to highlight that we see Chaoyang Trap House as a complement to existing China coverage, a space where writers can experiment, dig into niche interests, indulge in stories that can’t find a home, write in a voice they feel most comfortable in, and have fun while doing it.

Krish: We’re inspired by how Real Life Magazine writes about the web, how Substacks like Vittles and Tone Glow write about culture, and the scrappy experimentalism of Chinese art zines. It’ll be a mix of “this is new and cool” and “this is old but important,” told through a diversity of voices and styles.

Krish: At the end of the day, we are interested in maintaining a community of readers and being an intimate space to think about the trend-lines of tech and culture in China. One that isn’t cursed by a business, “gadget,” or “great power rivalry” lens.

Jaime: More people use their phones when they are on the toilet than think about dr. strangelove.

Krish: Speaking of cursed…we should talk about how this is all going to work, in practice.

HOW IT WORKS, IN PRACTICE

Tianyu: Chaoyang Trap House will be published in “seasons,” with fortnightly episodes and the occasional surprise drop. Season 1 will run from March to June, and Season 2 from September to December.

Krish: Each issue will contain 2–3 dispatches from the corners of the Chinese web, along with some group chat banter, recommendations, inklings, premonitions and at least one gua (瓜). I’ll be illustrating most of Season 1, though I’m very keen on getting to a point where we can commission artists!

Tianyu: Regular issues will be free (and mirrored here on our chaoyangtrap.house website), with a few premium specials later in each season. We have a $30 annual “group chat” tier, as well as a $5 monthly “patron” tier that will get you access to those special issues.

Krish: We’re funded by personal savings, friends, and (hopefully) your subscriptions. All contributors are paid. All subscriptions go 100% towards supporting our two main programs:

Tianyu: I think that covers everything. Our doors are open at [email protected] and on Twitter @ChaoyangTrap.

Please subscribe, spread the word, and hold us accountable. Issue 1 drops next week—we’ll see you then.

Krish Raghav is a comic-book artist in Beijing. He shares a hometown with Dhalsim from Street Fighter but cannot shoot fireballs from his face.

Jaime (bot) is a critic and translator based in Beijing. She is also a contributing editor at Spike.

Caiwei Chen is a journalist, writer, and podcaster. She cooks with boxed ingredients but tries to finish all her dishes with a gourmet touch. 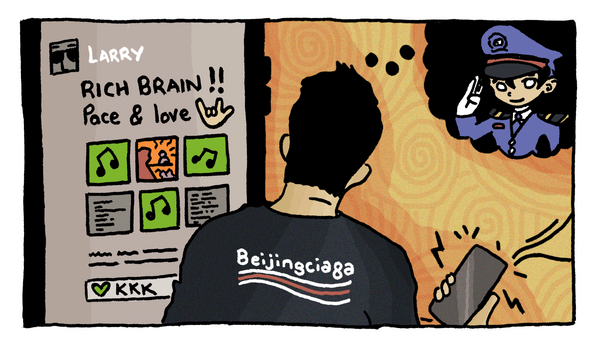 @richkids_english_police started as a private meme stash in late 2016. It’s led the recent rise of Chinese-language meme pages on Instagram.