This dispatch appeared in S01 Episode 7, along with The Magical Realism of Spongebob Slippers by Xuandi Wang. All images used with creator’s permission. Cover illustration by Krish Raghav.

Joshua: If it’s longer than 50 words, you can almost guarantee the Wikipedia entry for nearly any Chinese county, district or small city is weird.

These articles, and sometimes even for pretty significant cities, veer off into non-sequiturs, blatant pro-hometown bias, wonky machine translations or just completely miss what would seem to be most important things about the region. They often violate nearly every rule Wikipedia sets.

Let’s take Hua County (滑县) in Henan as an example of missing the most important points. Hua County is home to about 1.2 million people, giving it a population just a bit smaller than Prague. Its Wikipedia page was the only place Google could find me any English information about it.

If anything, Hua County’s article on Baidu Baike, the Chinese web’s Wikipedia equivalent, is too in-depth. Across 12,000 characters, it offers you reams of statistics about grain output, canal maintenance, and vocational school graduations. It also tells you about its history, the number of eaves on its Tang Dynasty tower, its acclaimed roast chicken, and some of its famous progeny, including CPC General Secretary Zhao Ziyang.

The English Wikipedia article barely tops 300 words, as do the pages in most other languages. The only local color is the two-sentence “Hua County in the News” section, citing the South China Morning Post.

“On 10 September, 2009, the Basic People’s Court sentenced Wei Fazhao to death for his January drunk-driving killing of eight people and injuring of three. It was the first death penalty given to a drunk-driver anywhere in Henan.”

It’s pretty clear that this has been included just because it’s the only time Hua County has even been mentioned in an English news story.

Even in the case where these pages have more content, what is included is often not what you’d expect from an encyclopedia.

The article for the central Zhejiang county-level city of Yongkang (永康, population 750,000) spends a few sentences explaining that the county has 2,000 years of history, and that its name has changed a few times. Despite Yongkang existing for 100 generations, most of the article focuses on its hardware-manufacturing industry.

The page for Wuhan is pretty normal. But the page for its Caidian district (蔡甸, population 410,000) offers a list of contextless, one-line anecdotes. Once, millions of bees died for an unknown reason (section titled “Bee Mystery”). Once, there was a particularly grisly murder (“Crimes Against Humanity”). Local school children sometimes plant trees (“Tree planting”).

Joshua: This isn’t just because these are smaller places. Compare these odd, barely-there pages to that for say, Nikšić. It’s the second-largest city (population 56,000) in Europe’s 40th largest country, Montenegro. Its page has a nice picture, detailed history going back to the medieval period, its cultural and educational scene, its sports teams, transport links, historical demographics and economy. Even tiny places in English-speaking countries have decent pages on English Wikipedia. The 891 residents of La Conner, Washington, boasts a full page that includes how the town went from making the wild turkey the official town bird in 2005, to attempting to expel all turkeys in 2010.

Wenzhou, as a wealthy city with a particularly large diaspora, has a page more detailed than nearly any other third-tier city. But it’s a great example of hometown cheerleading—much of the detail is simply effusive praise for the nine million Wenzhounese and their ancestors. Their math ability is simply outstanding. Their business sense is unrivalled in China (“A popular common saying calls Wenzhounese the ‘Jews of the Orient’”). They’re really amazing at chess. Taiwan’s higher education and tech sector was created by the Wenzhounese. They basically invented whole branches of Chinese philosophy and now write the finest Chinese drama. The only reason their unique music isn’t appreciated worldwide is that it’s too complicated for outsiders to understand.

This less-than-objective stance has even seeped into the page of neighboring Taizhou, which notes that “The city’s people are reputed to be industrious and business-minded, although not to the same degree as neighboring Wenzhou [citation needed].”

Xuandi: That’s my hometown! And the reputation is actually true lol.

Joshua: So, why are these places home to millions of people usually covered worse than European cities that would barely qualify as big towns in China?

An obvious reason simply could be that Wikipedia is banned in China.

It could be that the subsequent blocking of all Wikipedia versions in China in 2019 stymied the growth of a community who would be both motivated to write better Chinese regional articles and the language skills to actually discover the Chinese language sources needed to write fuller articles.

So why don’t local governments do something? Vast resources are dedicated to “telling China’s story well,” down to the local level. One of the articles that helped to kick off the recent smear campaign against Australia-based researcher Vicky Xu was apparently penned by a propaganda worker at a Chongqing prison.

And at least some inside the establishment recognize Wikipedia as an important platform. A BBC article from 2019 on “edit wars” on contentious mainland-Taiwan topics mentions pieces written by Chinese academics and publishing that call for the government to do more to boost China’s official point of view on the platform.

Many cities promote themselves in English, with many (especially in Shandong for unknown reasons) operating Twitter accounts of varying quality as depicted above in Krish’s “Bullshit Jobs in China” comic series. Weifang is a representative example, posting hundreds of tweets of banal landscapes with competently written English captions. But if you head to Wikipedia to learn more about Weifang, you’ll find lines that can only have been translated by a machine no more enthusiastic about its job than the city’s official tweeter. The local meat pie (肉火烧) is described as:

Though these pages are curiosities, they also represent a huge missed opportunity to address the huge knowledge deficit about China—try googling “Wuhan province” to see how many media outlets across the world fail to get the basic facts right in a way you’d never see with writing on the U.S.

That the only place to get English information about Hua County only mentions its population and a drunk driver’s death penalty means so much is out of sight—history, culture, roast chicken and even more weird stories.

While this information might be just a Google translate away, there’s no way to stumble across it while being sucked into a Wikipedia wormhole—you’d need to seek it out and have the knowledge needed to find it.

These pages are also probably a symptom of that knowledge deficit. It’s been argued that China isn’t a real place to Westerners—just a place to project fears and fantasies. This was clear in plenty of writing on the pandemic. Would better pages on Wikipedia change this? Probably not. But they’re a start—a truer reflection of the country’s massive diversity and relatable weirdness.

Yi-Ling: China’s Wikipedia pages seem to encapsulate the core problem with gathering English-language information in the country: those most equipped to do it, sadly cannot; those who can, are painfully ill-equipped. For that reason, I will continue to have to explain, in every English-language article that I write, that Sichuan Province, home to Deng Xiaoping and peppercorns, has a population roughly the size of France.

Jaime: It sounds like a lot of these small-town Wiki pages do mirror their counterparts—local government-built municipal history or cultural museums that are so useless in telling a story about the place, even though they might have cool artifacts, real information and knowledge often get lost in vagueness, grandiose language, or party-licking litanies. I want to think that it's not for the lack of knowledge or scholarship (in the case of history or archeology, surely many people are studying many things), but misplaced organization of knowledge.

Tianyu: Since the launch of Chinese Wikipedia in 2001, it’s been repeatedly blocked and unblocked by Chinese authorities until 2019, when it went behind the firewall in all languages. There used to be a very vibrant Chinese-speaking community on Wikipedia, dating back to the mid-2000s. Contributors from all over the Sinophone world had different politics. One Chinese Wikipedian wrote a letter to appeal to the Chinese government after it blocked the website for the first time in 2016, writing: “By blocking Wikipedia, we lose a chance to present China's voice to the world, allowing evil cults, Taiwan independence forces and others…to present a distorted image of China. We lose a chance to share academic knowledge with the world, and as users, a channel to gain information.” Edit wars over sovereignty and sensitive political issues were rampant, but it was important that difficult conversations existed and compromises were made. How did this self-governing community decide on editorial choices on polarized matters and deal with conflicts in a pre-“NMSL”/Milk Tea Alliance universe? (A testing ground for transnational Sinophone anarchism, maybe?)

It is also worth noting that China’s censorship of Wikipedia significantly discouraged unpaid contributors outside China from participating in the community. Domestic clones like Baidu Baike are nothing like Wikipedia—it is no secret that companies pay to produce and edit entries. (Baidu is notorious for amplifying false information at the advertiser's request while pretending it to be a community effort; it sold a medical discussion board to a private hospital,  leading to the tragic death of a college student, Wei Zexi.)

Henry: Tianyu’s comment makes me wonder—why aren’t there more lulzy/satirical edits to English Wiki pages about China? Why nothing like the addition of Paul Ryan’s photo to an entry on invertebrates? Come on, evil cults, stop slacking!

Joshua Dummer is a Beijing-based editor and meathead.

Xuandi Wang is a writer who grew up in Zhejiang. His spiritual animal is Sufjan Stevens.

Krish Raghav is a comic-book artist in Beijing. His Wikipedia bio would contain the section “Power Station Incident.”

Yi-Ling Liu is a writer in Beijing. She paused climbing for a while b/c spinal health.

Jaime (bot) is a critic and translator in Beijing who works in Chaoyang and has moved to Chaoyang. She is also a contributing editor at Spike.

Tianyu Fang is a writer who grew up in Beijing and is an avid collector of now-banned Jiang Zemin stickers. 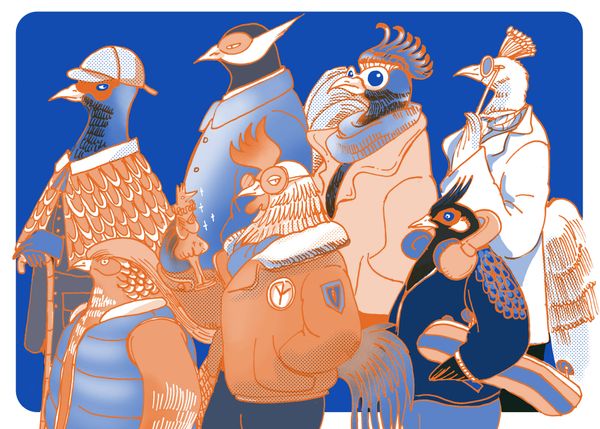 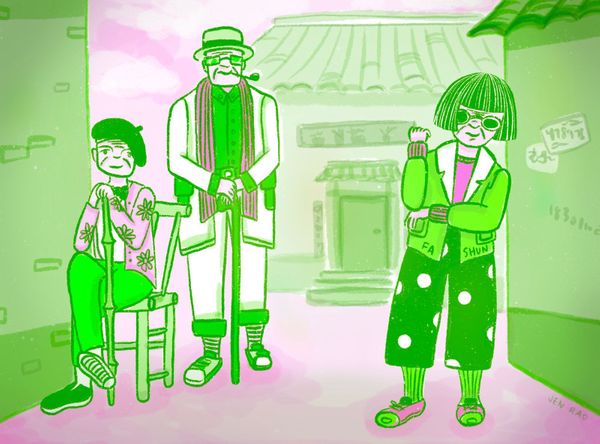 “The bricolage of senior-citizen fashion subverts the platform logic of influencer marketing.” Or, put another way, how SpongeBob slippers can be a symbol of the revolution.